Empowering one of India’s largest Oil & Gas providers to ensure maximum safety by leveraging existing infrastructure to monitor and prevent third-party intrusions, along a 73 km pipeline.

As one of India's largest Oil & Gas providers, this company bears a massive responsibility when it comes to ensuring the transportation of pipeline contents safely and efficiently. However, the topography posed a major challenge.

We partnered with Fotech Solutions to deploy 'HELIOS' - a highly advanced intrusion detection system. By means of Distributed Acoustic Sensing, it was possible to monitor and protect the entire length of the pipeline from a single location. 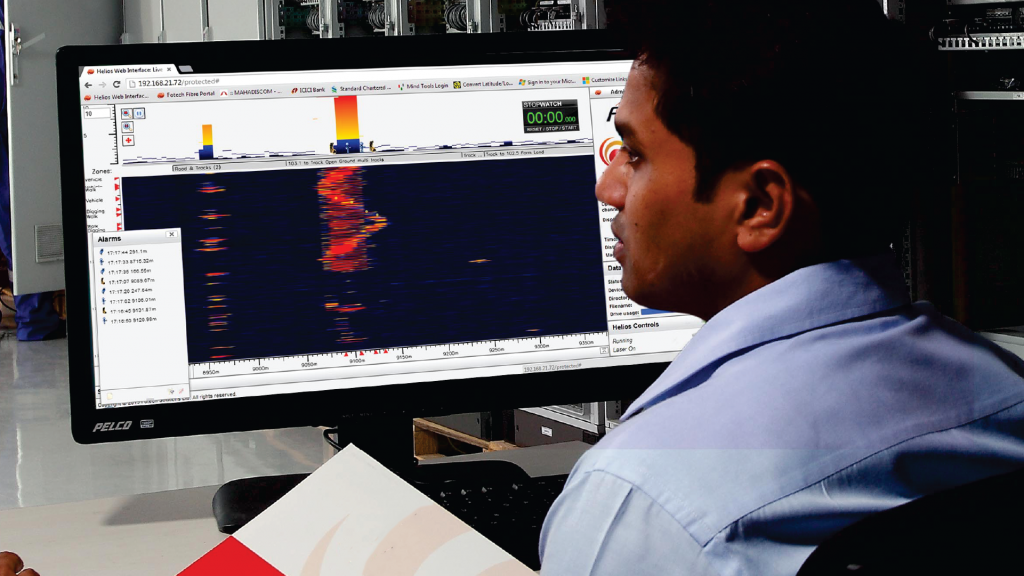 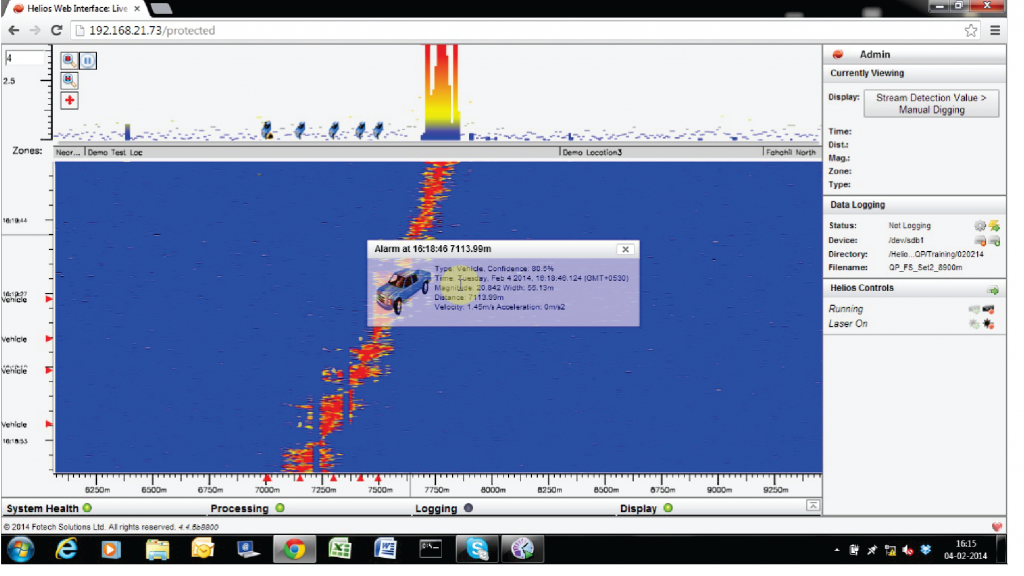 In this age of 24×7 monitoring and surveillance, securing every inch of a hazardous cross-country pipeline infrastructure manually is not an economical solution. One of our foremost customers realized this and sought the technological intervention needed to meet safety and security objectives.

The project objective involved the installation of an optical fibre-based Pipeline Intrusion Detection System for monitoring any kind of third-party intrusions along the 73 km stretch of pipeline. The system also required setting up an early-warning system that could equip the customer with the ability to immediately respond to potential intrusions, thus preventing pipeline damages.

Integration of Sensors and Control Systems with existing SCADA and CCTV systems for effective and real-time monitoring was an integral part of the project. We also had to build a basic signature library for typical intrusion activities and allow for the addition of new third-party activities as well.

The critical importance pipelines hold for Oil and Gas companies as well as the need to secure them from damage cannot be underscored. There exists a major threat of pilferage, which not only causes substantial financial losses to pipeline operators, but also poses a huge risk to life, property, and the environment.

Conventional security solutions like CCTV, IR, or ultrasound sensors are not feasible for monitoring pipelines that span hundreds of kilometres in length.

We faced a multitude of challenging situations, right from tracing the actual position of the pipeline along the entire route; passing through widely varying terrain of farms, villages, towns, industrial areas and uninhabited areas.

Implementation of Distributed Acoustic Sensing technology for Pipeline Intrusion Detection, which is a new vertical for pipeline safety and security in Indian conditions, was a challenging feat.

The exact type of intrusion (for example manual digging, mechanical excavation, etc.) had to be identified. This task becomes even more exhaustive when there are multiple simultaneous intrusions. This is further complicated by the presence of background environmental noise that would overwhelm the location capabilities of regular sensors. Thus, we needed to employ special sensors that utilized advanced optoacoustic engineering expertise.

Furthermore, the intrusion detection system had to be seamlessly integrated with the existing command and control system and security set-up. Alarms were to be transmitted through a variety of means to multiple responders, in order to ensure rapid action in case of a real threat. It was also necessary to prevent false alarms triggered by benign activities occurring further away, like irrigation and construction. 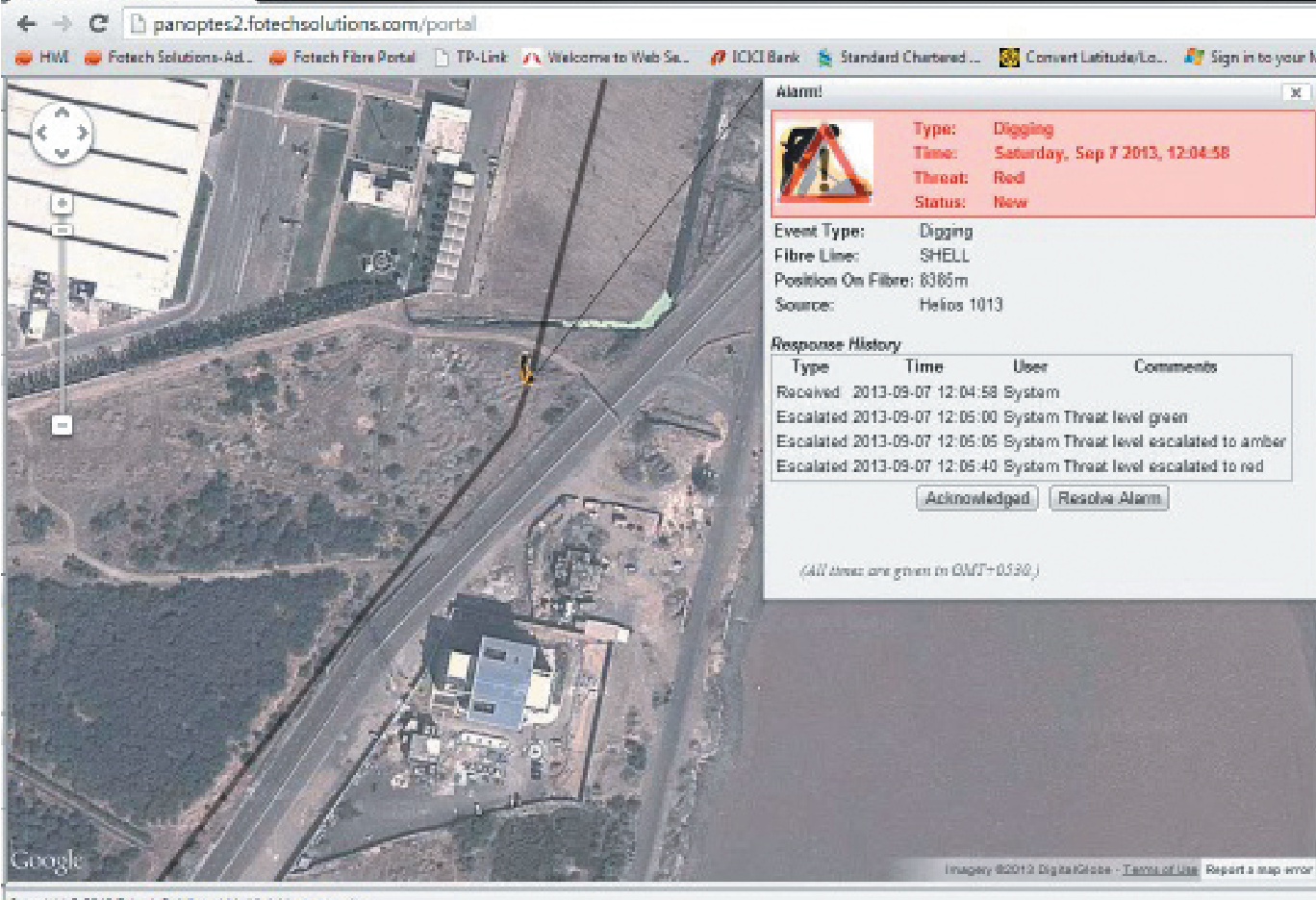 Delivering a full range of end-to-end PIDS solutions using existing OFC required thorough analysis and testing, with a detailed execution roadmap through one of the most demanding sites.

A distinctive feature of the solution is that the PIDS instrument is located in the control room and requires no installation or power in the field; besides the existing OFC. Hence, just by harnessing certain unique properties of the telecom optical fibre cable running along the pipeline, the distributed sensing system was able to detect, accurately locate and even identify any intrusion attempt along the entire monitored length in real-time.

In pursuit of locating the exact positioning of the OFC, the entire route was divided into various zones for identification and singularity with a minimum width of 0.6 meters. By carefully calibrating the system at multiple sites under varying operating conditions, a new acoustic stream was generated which could distinguish pipeline vibration during high flow rates from actual third-party interferences.

The system architecture consisted of a PIDS server with RAID 5 configuration and 1 Helios controller for the pipeline at a central station. The controller being a two-channel system, enabled pipeline monitoring in both directions of the central station. The controller was connected to the server via an Ethernet link, with two client workstations at opposite ends, enabling sequential monitoring of two sections of the pipeline. The connectivity between the clients and server was established through an Ethernet link extended over the existing pipeline’s telecommunication system.

The system worked on the principle of Distributed Acoustic Sensing, wherein acoustic signals generated by intrusion activities are picked up by the optical probe pulses sent down the OFC. It consists of an interrogator that sends optical pulses from a highly coherent laser and detects back-scattered light.

Each type of intrusion has a distinct “acoustic signature” by which it can be uniquely identified. Using specialized algorithms involving powerful computational techniques, the raw signals are processed to zero-in and precisely identify the type of activity.

Upon detection of an intrusion event, the system generated an alarm in real-time, which indicated the type of intrusion and displayed the exact location of the event with precise GPS coordinates on a map.

A further layer of algorithms was implemented to determine alarm severity so that persistent, threatening events were categorized as critical alarms. These alarms can be viewed on a Graphical User Interface. Finally, alerts are then sent to security personnel over SMS or e-mail so that a rapid response can be initiated. 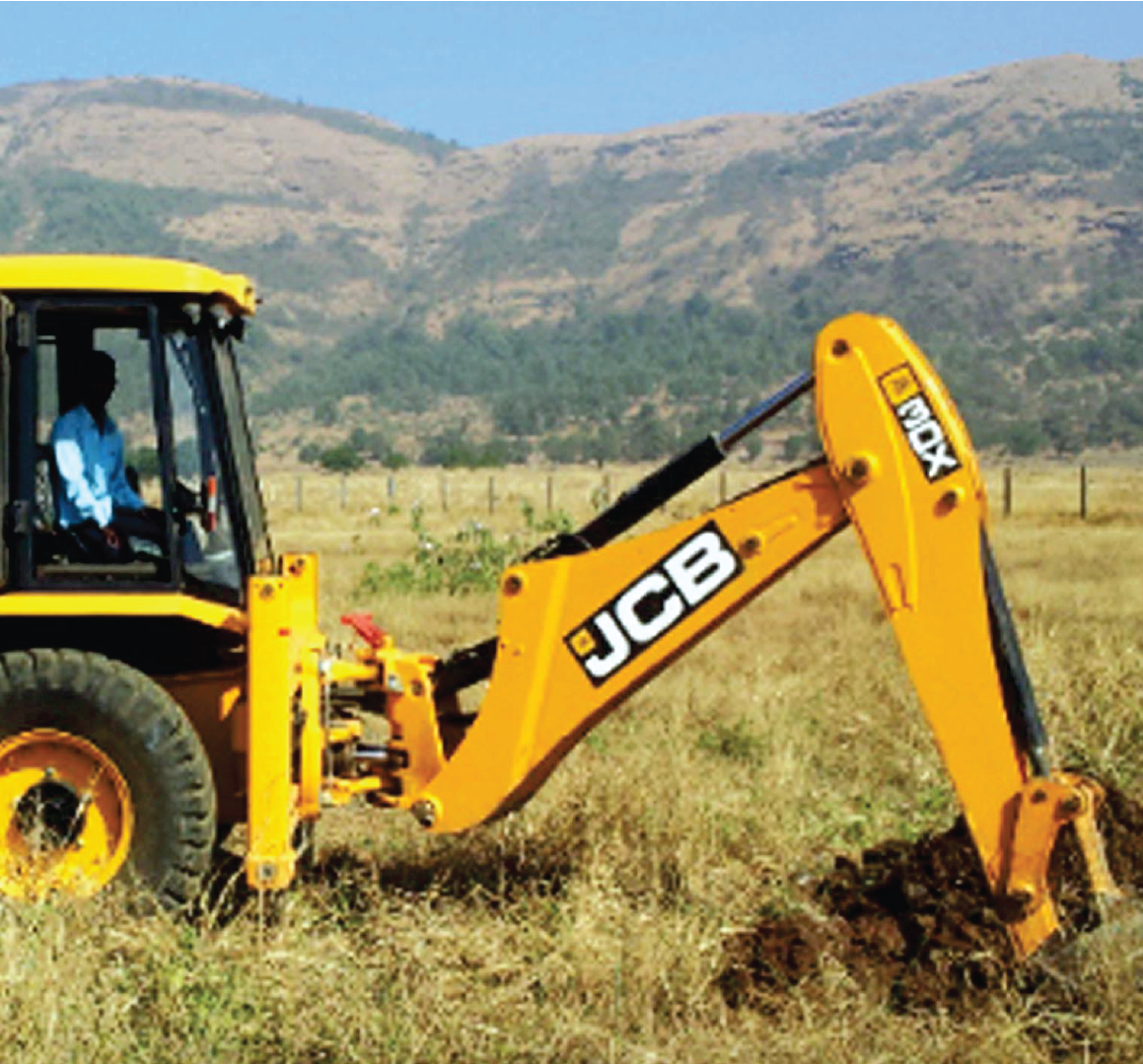 We are ever dedicated to serving our customers with unmatched advanced engineering solutions, often revisiting and reinventing its offerings. We pushed the boundaries of ‘customer first’ by executing the entire project with minimal external guidance when implementing DAS-based intrusion detection technology for the first time.

Understanding the complex system dynamics through prior research and testing and integrating with the existing communication systems saved considerable time and effort.

The Helios software which was completely web-based allowed for remote monitoring on any computer/portable device with a web browser. In addition to real-time visual monitoring, predefined event disturbances automatically sent out notifications so that no important event disturbances go undetected, ultimately securing areas that were previously not under supervision.

The notification consisted of a Google maps display of the pipeline pinpointing the location of the event disturbance, the time, magnitude, and type, negating the importance of physical presence in the event of an intrusion. The entire system was integrated in such a manner that the flow of alarms from PIDS to the CCTV surveillance system greatly enhanced safety and security, reducing dependability on human accuracy and significantly reducing the investment.

Added functionalities included pig-tracking and leak detection. One of the striking features of this detection mode was its ease of use with the provision of adding new signatures to the library for future detection in case of new events/intrusion types. 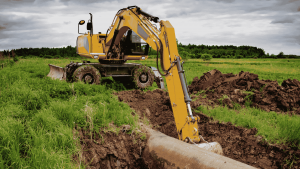 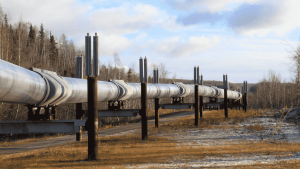 Connecting one of the world’s largest gas pipelines